A contact report is a record of a meeting between 2 parties, usually working on projects together. For example, a client and consultant, a salesperson and their client, a buying team and design team, a solicitor and their client. 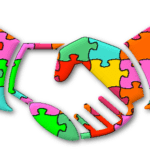 It is good practice for one person to take notes of the proceedings and circulate them to all present, and perhaps some interested parties not present. Use of this report is not as prevalent as it could be. I find it a highly effective method of tracking progress on a project, a great starting point for preparation for the next meeting, and a way of ensuring all the actions which were so readily agreed in the meeting are actually completed in advance of the next meeting.

For example a salesperson will always write a contact report and submit it to their sales manager, so that there is a record of the meeting. The report can be used in many ways –the manager may decide to make comments or attend a future meeting based on the report. If the sales person is not available for future meetings for any reason –illness, change of role, there is a record of what the client said, asked for, ordered, or purchased.

This is quite similar to making meeting minutes, in that the function of them is largely the same;-

As in minute taking, the report should record who is at the meeting, date, location, and need only sum up each discussion point. There may be a long discussion on a topic, perhaps even a heated debate. There is no need to record all of that, just briefly summarise the outcome. If there is a particularly long discussion and some dissension or heated debate you might record that. It is purely a matter of judgement as to whether the information is useful to the group.

It is important to note next steps, together with who is responsible, and crucially, when the tasks should be completed by.

There may be room for a little more subjective reporting here, depending on the company and culture. BUT remember that quite often the report will be circulated to the delegates from the other company, so don’t write anything you would not want circulated around their management!